The 4D Project Team were reunited on September 19th and 20th at the facilities of the innovation research centerKnow-Center of the Graz Technology University in Austria.

The 4D project aims to introduce mobile technology into clinical practices, creating a bridge between the differentactors involved and favoring the best experience in the practical learning of students in healthcare placements.

The needs of each participating country were assessed within the co-creation and co-design methods. In whole, the project members were able to work collaboratively on the key elements regarding the design of a mobile applicationthat will respond to the requests identified. During the meeting, some proposals were put into practice highlighting theconcept, content, methodology and processes in depth based on common and relevant priorities of the workinggroups. 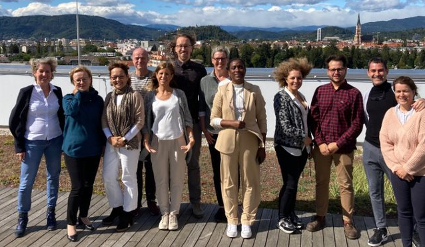 The 4D in the Digitalization of Learning in Practice Placement project has been funded with the support of the European Commission under the 2021 call “Strategic Partnerships for higher education KA222” within the framework of the Erasmus+ programme.